Coffee Set, Palace of the Republic, GDR, around 1980

Marked: in green and blue on the underside.

This set of two coffee cups with saucers, two dessert plates, sugar tongs, two paper napkins and a plastic bag comes from the home of a former GDR-official. Back in the day it was part of the gastronomical facilities in the Palace of the Republic in East-Berlin, which opened its doors in 1976. The Palace was seat of the Volkskammer (parliament) and the cultural hub of the GDR between 1976 and 1990 with several entertainment facilities. Super stars of their time like Udo Lindenberg, Santana, Milva or Tangerine Dream performed on the stage of the “Großer Saal”, the main concert hall in East-Berlin. Setting the tone, large-scale paintings by renowned GDR-artists decorated the walls of the lobby area – Wolfgang Mattheuer’s work “Guten Tag” could be admired in the palace gallery on the first level.

For many different events around the clock people met in the various restaurants and bars on all levels. There, one would have drunk and eaten of porcelain by Thuringian manufacturer Graf von Henneberg. The manufactory was established in 1777 in Ilmenau, Thuringia, mainly producing domestic and catering tableware.

The tableware was part of the ‘Ratio 1001’ series, designed by Günther Pucher and manufactured by Henneberg between 1977 and 1990. Every piece is marked on the underside with the manufacturer’s label in green or blue respectively. Related in shape is Heinrich Löffelhardt’s service ‘Arzberg 2200’ which was a huge success in West-Germany at the same time. All of the porcelain and tableware used throughout the Palace were marked in the walling with the alloyed letters ‘PdR’. Like an insignia and national emblem, the design was of high recognition value.

Today, the newly reconstructed Berlin Palace, where once the Palace of the Republic marked the cultural center of the GDR, exhibits a set of Pucher’s tableware to commemorate the site’s history. True museum pieces and a real delight of nostalgia for the GDR! 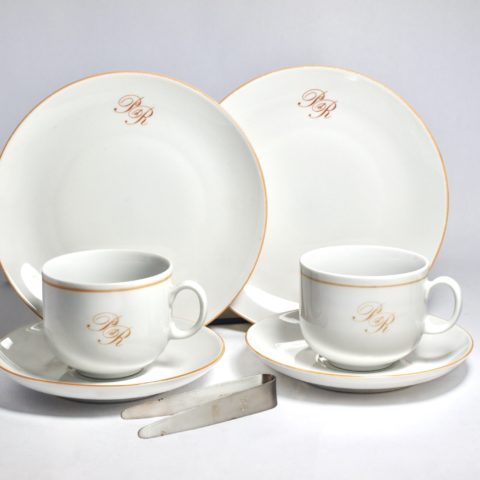