Marked: on the underside, „PMB“ in green.

Condition: in original, flawless condition. No chips, no color abrasion.

Erich Kuithan (1875-1917) ranks among one of the most important painters and illustrators in Germany around 1900. Above that, he also executed pioneering designs for the applied arts. In 1903 he established himself in Jena, Thuringia, and worked as illustrator and draftsman at the drawing school of the Volkshaus, one of the first free educational institutions in Germany set up on the North American model. Throughout his time in Jena, he delivered a few designs for the porcelain manufactory in Burgau. His creations in porcelain really stood out and created a stir internationally among the reform movement.

The manufactory in Burgau was founded in 1901 by Ferdinand Selle and mainly produced high quality domestic ware up until 1929. Apart from Kuithan, modernist artists Henry van der Velde and Albin Müller also carried out designs. Yet it has only been Kuithan’s service “Gerippt” which has been featured in the Deutsches Warenbuch – as a matter of fact, it was even featured with two different décors: “Victoria unterglasurblau” (the one offered here) and “Weiß mit Golddekor”! The Deutsches Warenbuch as a manual to exemplary German design was edited by the Deutscher Werkbund and published in 1915, internationally promoting the trademark “Made in Germany” for the first time. 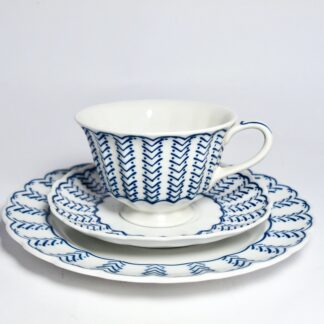