Condition: Complete, no cracks, no kinks, without spots, binding and cover in very good condition.

The artistic contribution of the „Deutschen Werkstätten” was important for the arts and crafts movement, in Germany – often called “new housing”. The „Deutsche Hausgerät“ was a program, which meant elemental industrial construction of furniture and furnishing items. It was developed by about 20 artists in the workshops of the manufacture. It shows the efforts toward the revival of the German applied art. All furniture were solid, high quality, elegantly and inexpensive.

The carpenter Karl Schmidt had founded the company in 1898, the original name was „Dresdner workshops for craftsmanship“. The companies settled 1910 to Hellerau, closed to Dresden. A Garden city came here since 1909. Hellerau became a magnet for artists and spokesmen of the arts and crafts movement. Even the German Werkbund and the Dürerbund relocated their offices to this place.

1910 Schmidt had entrusted Lucian Bernhard to invent the graphic concept for the Deutschen Werkstätten. During this time the new profession “typographic designer” was born – compare AEG, Kaffee Hag, Manoli. The concept Bernhard realized pointed out the cooperation to the „Gemeinnützigen Vertriebsstelle für deutsche Qualitätsarbeit“ (here translated as “Non-profit center for German Quality Control”) and the „Deutschen Museum für Kunst in Handel und Gewerbe“ (“German Museum of Art in trade and industry”), so called “Werkbundmuseum”. The concept was based on typographical elements like the signet, which is shown on the back of the catalogue, linear principles and special characteristic colours. Indeed, the deliberations concerning the design of the “Deutschen Warenbuch” (the patternbook of German design”), which was edited by the German Werkbund” took their beginning here.

The success of the “new housing” resulted in this cooperative working relationship between these organizations and Lucian Bernhard found the innovative “Corporate Design” as a common strategy. 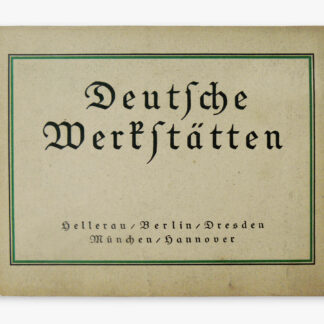