Stoneware gray beiges, glaze „kölnisch braun“ (brown even), turned in the form, wavy diagonal, with plastic ornaments of flowers, which vary in the size of the volume of the pitcher.

In over a hundred years, Höhr-Grenzhausen is the center of ceramic industry in the Westerwald. The company Merkelbach was founded 1845 by Wilhelm Merkelbach and continued in the third Generation of his grandson from 1907 on. Reinhold Merkelbach looked for the contact to the artists of the German Art Nouveau. The alienation between form and decoration was occurred increasingly in the 19th century. In the Westerwald began a new era with the reflection on a new originality of typical forms, on a proper use of material and ornament. Artists and artisan have already completed the English “Arts and Crafts movement“, set social ideals, especially a “art for the nation” should favor.

On behalf of the Prussian administration for art the Belgian artist of the art nouveau Henry van de Velde teaches the decisive impulses at the technical school for ceramic in Hoehr in the years between 1900 and 1904. Carl Mehlem was among his students. After this training he begins as a modeller at Merkelbach, from 1912 on he influenced as a senior sculptor and designer the appearance of the company.
Mehlem stressed in his designs the artisan component, the artistic work at the potter’s wheel, and gave space to the ornament correspondingly to the form.

The Deutscher Werkbund awarded a few ceramics of Merkelbach as part of its project „Deutsches Warenbuch“ (translate here: german schedule of commodities).
Under this pitcher is the rare blind mark of the „Dürerbund-Werkbund-Cooperative“, as a kind of a “Quality- signet”.  Apart from Merkelbach these ceramics were exclusively offered from the “non-profit center for German quality control”.

The Cooperative promoted the spread of certain drafts as “exemplary mass-produced goods” to win a “significant influence on the general culture,” – so it is written in the „Deutsches Warenbuch“ from 1915. 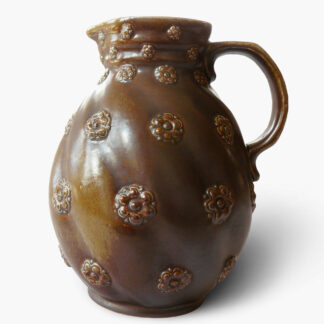