View cart “Pitcher, Adelbert Niemeyer, 1912 for Villeroy & Boch, Mettlach, Germany” has been added to your cart.

Richard Riemerschmid (1868-1957) who was highly influenced by the English Arts & Crafts Movement ranks among one of the most important artists of Art Nouveau in Munich. He was one of the founders of the “Vereinigte Werkstätten für Kunst im Handwerk” (engl. United Workshops for Art in Handicrafts) in Munich in 1897 and of the “Deutscher Werkbund” (engl. German Association of Craftsmen) in 1907 as well as director of the Schools for Applied Arts in Munich and Cologne.

Between 1903 and 1905, together with Henry van de Velde (1863-1957) Riemerschmid designed for the Royal Saxon Porcelain Manufactory Meissen. This period marks a pivot point in Riemerschmid’s artistic career at around 1900, even if his designs for Meissen are less intensively incorporating elements of the handicrafts as his other designs for stoneware for example. Though, his décor “Blaue Rispe” (engl. blue panicle) for Meissen is subtly enriched by an erratic repetition of circular shapes that draw back to Riemerschmid’s admiration of the handicrafts and implements the characteristic randomness of his designs. The “Blaue Rispe” is a stylized foliage décor in underglaze blue on white, with which Riemerschmid offered a modern alternative to Meissen’s traditional blue and white onion pattern that had been continuously in use since the 18th century, by taking up and modifying its forms. Apart from an artistic approach, Riemerschmid took into account the utility of his porcelain in everyday life. The edges of his pieces are regularly dented while the blue dots are only slightly elevated and smooth, so that any grime could be removed easily.

As a groundbreaking design of the German arts & crafts reform movement Riemerschmid’s modern design for Meissen was well recognized around the globe. The manufactory itself, however, did not include Riemerschmid’s progressive service into their permanent range of goods since Meissen is specialized in traditional tableware. Accordingly, every piece of the “Blaue Rispe” today was manufactured on personal requests by progressive customers, who valued the “Blaue Rispe” as a true testimony of early modern design.

This set of teacup, saucer and breakfast plate was produced between 1924 and 1934, when Max Adolf Pfeiffer was director of the manufactory as the dot between the swords indicates. 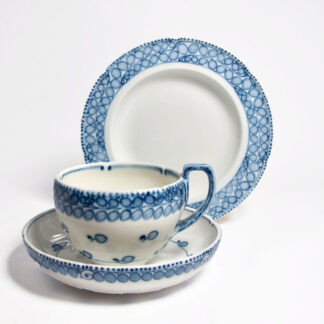