View cart “Ring with Peridot and Brilliants, 1990s” has been added to your cart.

In the beginning of the 80th Petersen got a lot of respect for his work. He was asked a for guest lectures at the Danish Academy for Goldsmiths, he was a jury member at the Council of the Danish Goldsmiths and in 1980 he designed in order of the Danish State the insignias for the bishops’ ordination in Greenland. In 1981, 1982, and 1983 he joined the advisory board of “Statens Kunstfonds 3-mandsudvalg for kunsthandvaerk og kunstnerisk formgivning”. He received many awards, including the desired Danish craftsman’s annual award from 1983. His objects were presented in solo exhibitions at the Court Gallery, Copenhagen, 1978-1980, at Galleri Boje in Aarhus in 1983 and at the Danish Museum of Applied Arts in Copenhagen in 1984. The Kunstindustrimusset in Copenhagen devoted to the artist his own exhibition in 1984 and took some works in the permanent collection. 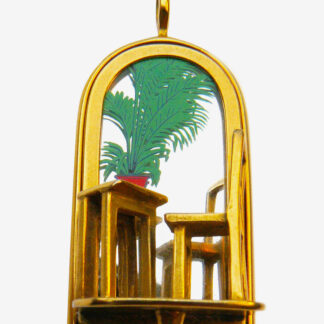