A “true lover’s knot”, an expression of love that strengthens the everlasting bond once again.

The knot goes back to the Hercules knot, which probably – according to tradition – corresponded to our common square knot. In ancient times, especially in Greek and Roman culture, the Heracles knot, was considered a particularly strong knot. It became a popular jewelry motif because not only Hercules’ heroic deeds but also his fertility were legendary. According to legend, the Greek hero impregnated the 50 daughters of the king of Thebes, the Thespiades, in a single night, as the Roman lexographer Festus noted down. With that in mind, in later generations, people tied wedding belts in this way as a sign of the solidity of the marriage bond.

In this French ring the endlessly connected strong knot appears like two intertwined textile ribbons.  The two strands come from different directions and are inextricably tied to each other.

The ring will be shipped in a jewelry box. It is possible to inspect the ring any time in Berlin, Germany, where Dr. Heide Rezepa-Zabel is happy to assist any interested buyer. 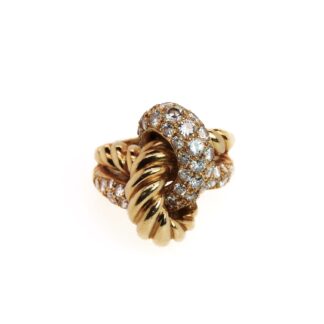