The “Jonette Jewelry” created the “JJ” trademark. The company was founded in 1935, in Providence, Rhode Island, and went out of business in 2006, due to the foreign competition and market conditions.

The sixties “JJ” pieces are collectible nowadays. They prefigured the Swinging Sixties with their ubiquitous mini skirt and anarchic youth culture starting in Europe and the US, just as the “New Look” was the harbinger of the glamour.

During the Sixties rather than being mere adornments, ornaments became an attribute of the outfit whose fabrics, colours, and shapes were part of theme to which the accessories were also tied in order to create a total look.

Be the first to review “Pink roses, brooch and earrings, 1960s” Cancel reply 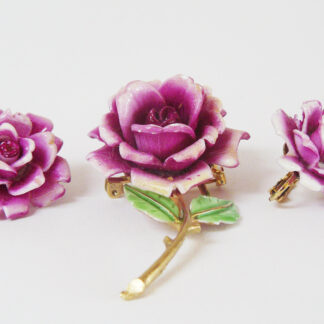