Marked: on the underside with S. T. Dupont, manufacturer’s mark and #10EF07A.

In 1872 Paris, Simon Tissot Dupont founded a manufactory for high-end leather goods and travel kits, which were very popular among the French upper class. His goods, crafted from exclusive materials, were well appreciated by royalty and statesmen alike and were, of course, also requested by the stars of their time. Due to the scarcity of materials and the declining demand for high end travel goods during WWII, Dupont started to specialize in lighters. It was especially the fuel lighter in aluminium which Dupont officially registered in 1941 that meant a huge success for his company in the early 1940s.

In 1952, Dupont patented his first gas lighter, which was at the state of the art. And also because of its timeless and simple form just like, of course, the highest precision in manufacturing the lighter won a lot of customers. The latter was only possible due to the high production intensity of the company, which still up to today produces all of the components itself.

The gas lighter offered here is  a great example of Dupont’s Ligne 1, which is assembled from over 70 components! The solid brass body features a fine guilloche and was then gold-plated. The high quality becomes apparent also in the adjustable flame plate next to the lid’s lock, through which the height of the flame can be individually set. When opening the lid, the lighter makes the distinctive click, an important trademark feature of a Dupont lighter. A true sleek and elegant design classic! 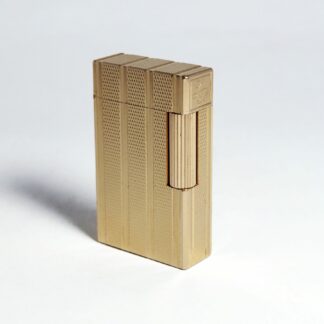