View cart “‘The vase with seven faces’, Fritz Heidenreich, 1950 for Rosenthal, Germany” has been added to your cart.

Both butter-dishes in very good state, no chips, no glaze faults, the smaller box has  inside a discoloration and at the ground a superficial heat crack (see picture).

Only the 1 pound dish left!

Richard Riemerschmid is one of the greatest German designers of the twentieth century and the leading representative of the “functionalist” wing of Munich “Jugendstil”, native of the city. His views came to dominate the design establishment. His name is especially associated with stoneware manufactured in the Westerwald, which drew the highest praise from critics and soon began to be produced in series.

This butter dish is part of a 5 pieces set, the series with the modelnumber 1730: a mustard-pot, an eggcup, a salt-bowl, a milkbowl and a plate. The mustard-pot, a vessel on three legs (cp. offer) belongs to Riemerschmids early ceramic works in the year 1902. It became in form and decor model for the other dishes-parts which were developed from 1904 on.

All parts have a spherical body ornamented in a pattern of offset, rounded bubbles. Riemerschmid’s designs emerged from his own experiments at the potter`s wheel, adapted age-old techniques to modern production methods; they featured solid forms derived from the properties of the material and simple patterns in traditional colours. 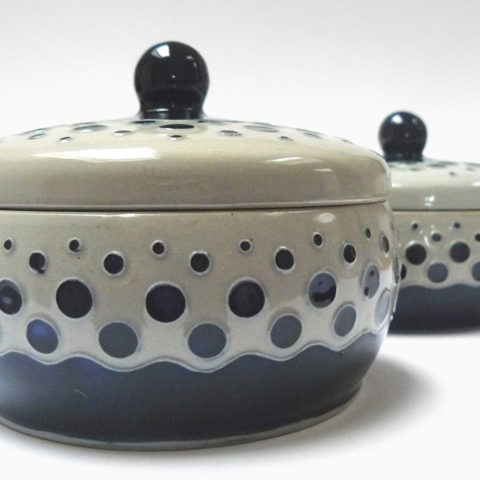